We discussed the new tendency for a stylized look in video games and talked about the way they approach the stylized environment production.

Founded by Mr. Dzung Phung Dinh, the winner of the recent Art War 2 contest, who has been around the industry for more than 10 years, we has around 15 employees divided among 3 teams: Character, Environment, and Animation.

We focus on game art production and 3D Design. We produce breathtaking stylized art for games around the world and provide aid and support for developers from indie teams to larger companies, bringing the best of stylized game art to the world.

We are certain that with the success of the recent trend of stylized games such as Overwatch or Fortnite, more and more dev games are shifting toward stylized approach. We are expecting a really bright future ahead for stylized trend. 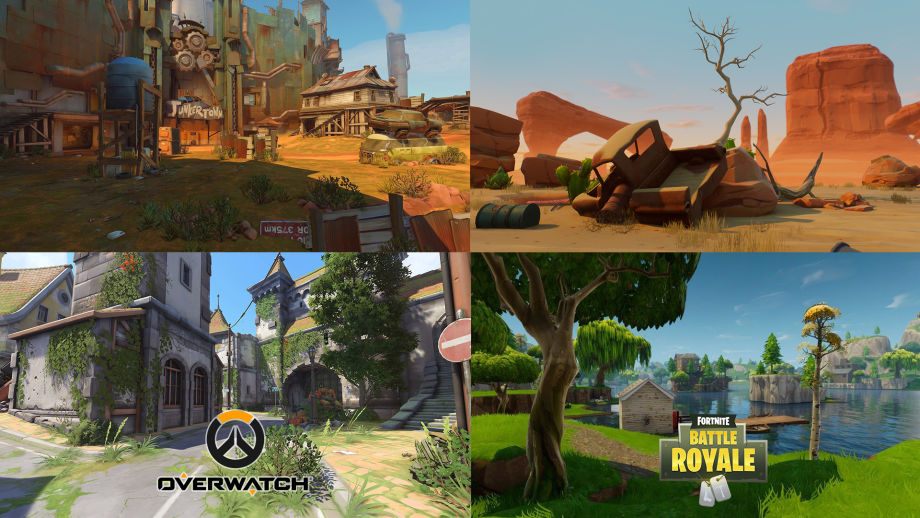 We expect that there is still a certain level of demands for stylized stuff, especially developers who want to add a new breeze to their games. Although the majority of the main market is on realistic stuff, our goal is to raise awareness for this type of content, bringing the community closer to the stylized trend. The package could also help the need for stylized visual referencing and library preference. 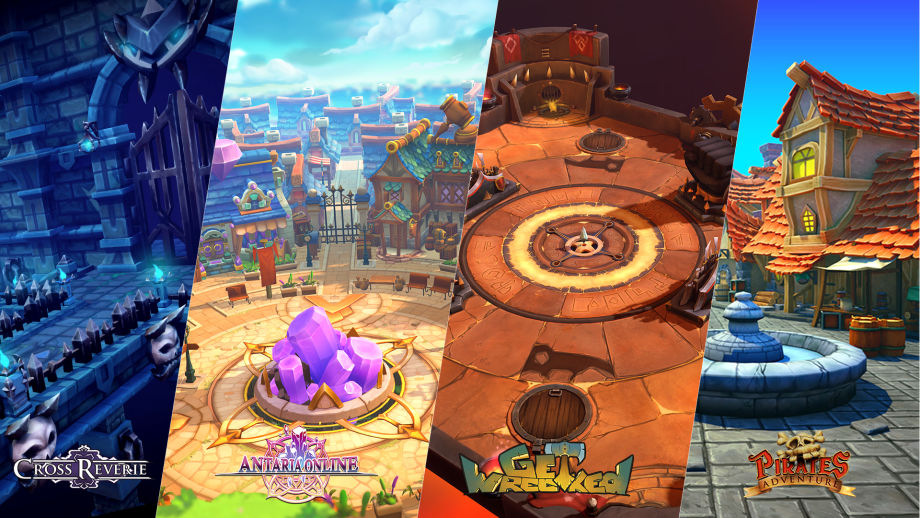 Currently, most of the stylized market is packed with unlit hand-painted asset mainly for the mobile platform. Our package is focusing on stylized assets for higher end PBR support with outstanding quality. Based on our experience and clients trend so far, we believe a lot of next-gen game dev are shifting toward stylized contents, realistic is no longer the only potent choice for a successful formula.

One of our best confidence in the package is while the package is super friendly for level builders, easy for assembling and creating the whole landscape from scratch, the overall design and visual still remains appealing with various types of assets to work with. All these elements help level design much more relaxing with. We believe that anyone even a newbie environment designer can use these assets to create stunning looking levels. 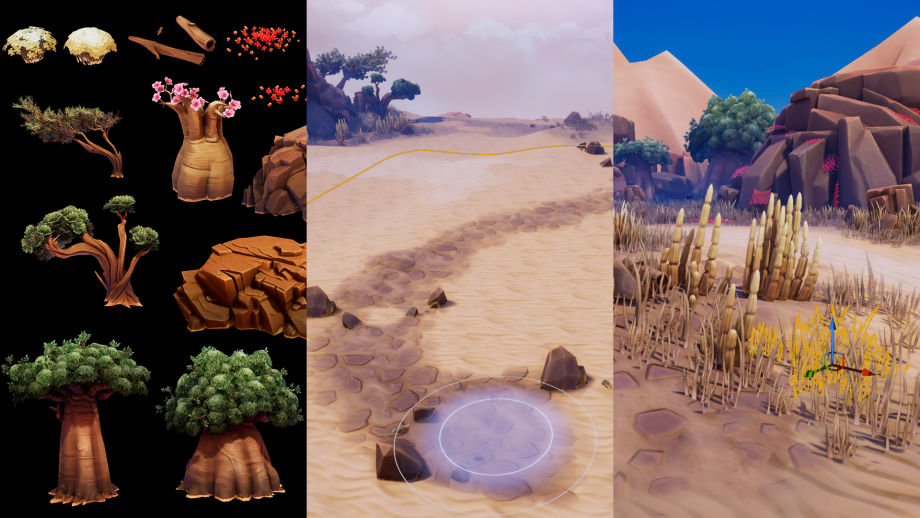 When we decided to work on a stylized environment pack that looks similar to Overwatch, the first thing to do was to collect references to come up with the overall visual feeling. Then we worked on the concept to lock down all the visual design. While working on the concept, we planned ahead and kept in mind what kind of assets are possible for 3D production and how we would create the pack with current 3D tech. 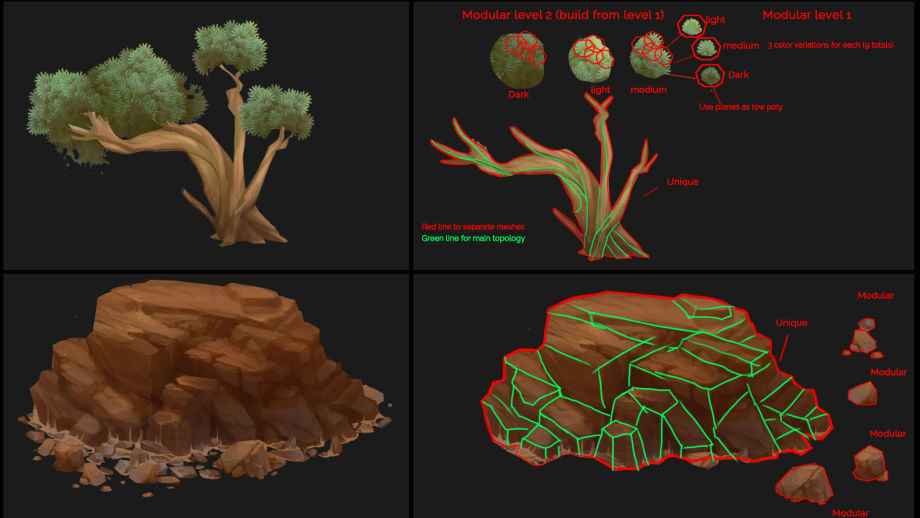 Based on our previous experience in mobile environment games, we still keep a certain level of awareness of what possible and what not in terms of environment 3D art technique. As every environment will consist of terrain/tiling/modular assets, we had to find the most effective way to produce each element, considering our current tech, manpower, and resources.

When every design is set, 3D production department will pick up and start breaking down into details tech spec. Unlike building individual characters, for the environment, we have to deal with the management of a large number of modular assets with the complexity of combining them together. 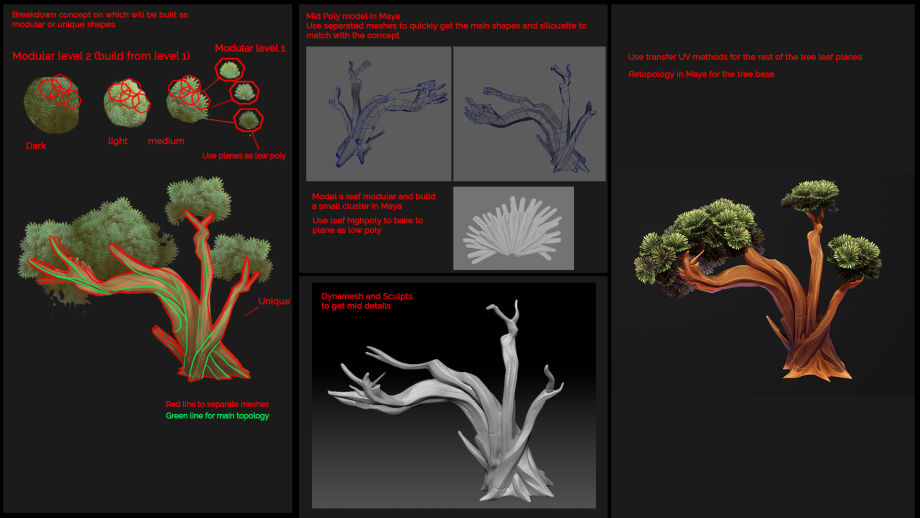 We noted down and planned ahead every step needed for the production of every asset, what kind of technique will be executed, how we will model it, how we will texture it, with which software for which stage. This helped us to keep track whenever a problem appeared and saved time on the stage when you go back and forth between feedback and maintenance.

Our workflow and approach for the environment actually did not derive much from the character production. The technique still remains the same, the only major difference is that the breakdown goes more toward modular and tillable assets so that a reasonable amount of work would be enough to cope with a large scale project. Also, for environment assets, it is actually easier to translate between concept and 3D model with less loss in detail, look and feel.

For starters, we collect a bunch of most beautifully crafted stylized rocks that look and feel closer to our chosen visual style, from sculpts to finished texture to base our visual guideline on.

At first, we create a mid poly version which focused purely on all the silhouette and major shape